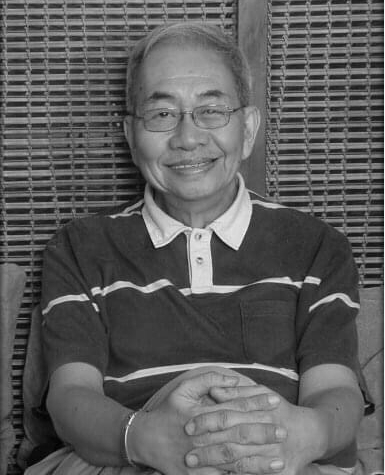 We were introduced to the best tasting brewed coffee in the 80’s at his Otomed Clinic long before Starbucks opened its first branch in the Philippines in 1997.UST residents had the opportunity to be exposed to Otology and Neuro-Otology early on. We were fascinated by new diagnostic modalities he first introduced in the country such as BERA and ENG using Nihon Kohden brand. We vividly recall measuring amplitudes of nystagmus manually using EKG strip papers and ABR waveform peaks using graphing papers.

During breaks, apart from the aroma of the finest coffee, he would play arias and classical music, much to our enchantment. He was very keen in photography as evinced by his collection of Leicas and Hasselblads even having his own dark room where personally developed his own photographs.

It was always a treat for residents to be a “chauffer” to pick him up at his residence in New Manila to attend our grand rounds at UST and back. You get to talk about a myriad of subjects even conversing in fluent Spanish as the case may be.

Dr Reyes was a man ahead of his time. He spent hours on his Apple Mackintosh computer while everyone else was on Microsoft, MS-DOS. Who would ever think that he would foresee that it would become the dominant computer system in the world now? When asked why he was the odd man out? He simply said “When you use it, you realize that it is far superior to anything else. When argued that Microsoft system was easier to use, he simply replied that “the easiest is not always the best way.”

He was one of the first few members of the society to totally focus on what is arguably the most complex subspecialty in ENT, hence the title of ” Father of Philippine Neuro-Otology”.

One thing that we learned from him is his meticulous attention to details. He would accompany us for endless hours during our surgical procedures. He even converted his kitchen at Otomed into a temporal bone lab so he can monitor our progress in dissection. Needless to say, some of us decided to embark on Otology and Neuro-Otology as a subspecialty to follow his footsteps.

His generosity is beyond limits having established the Edmundo Reyes Professorial Chair In honor of his father who was a former chairman of the Dept of EENT at UST. When Otomed ceased operations, he donated his equipment to UST which included an operating microscope and micro-otologic instruments.

Our last encounter with him was when he was being invited as guest of honor during the 35th Anniversary of the Dept of ENT scheduled for Dec 2019 which was unfortunately rescheduled because of Typhoon Tisoy. He amazingly looked much the same as we meet him before attributing it to stem cell therapy.

Well, nobody lives forever. Every bright light inevitably flickers and is extinguished. But one thing is constant in this universe… continuity. Dr Reyes has passed on, but he lives on in every member of the society that he interacted with. From his residency days at PGH to the residents and fellows he continuously inspires in his own unique ways.

Because of these unusual times, we are not able to give him a proper sendoff which he deserves. I guess that is how he wants to be remembered, an enigma. Let us not mourn his loss but cherish the beautiful life he lived.

As they say in French, “SANS ADIEU” but utter in Spanish, “HASTA LUEGO”.